Bail hearings are “Court Hearings” to see if the accused should be released while awaiting trial.

Bail hearings are “Court Hearings” to see if the accused should be released while awaiting trial.

What is a Bail Hearing?

After being arrested, the police must release the accused pending trial or show why they should be kept in custody.

The judge must consider 4 things:

During a bail hearing the onus is on the prosecution to explain why the accused should not be released from custody.

Bail hearing may also be called a “show cause hearing”. 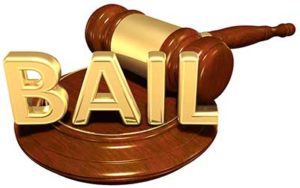 Why do they Want a Bail Hearing?

Bail Hearings are considered necessary when one or more of the following grounds exists in a criminal prosecution;

To ensure that the accused attends court;

To protect the public;

To maintain confidence in the administration of justice;

To obtain or gather evidence for the court case;

Since many Toronto area courts are overburdened with trials and have limited resources, when a person is arrested they can remain in jail for many months, unless they are released at their bail hearing.

If you or a family member has been arrested and are facing a bail hearing in the Toronto area contact me to discuss the bail hearing process.

Speak to a Bail Hearing Lawyer Today
Contact Us

Some bail hearings for more serious criminal charges, may be considered a “reverse onus”.

At the end of the bail hearing the Justice can either;

The Justice may require that a bond or cash deposit as bail be placed by someone acting as a surety for the accused. A surety is someone who puts up the bond (a promise to pay a set amount of money on behalf of the accused) at a bail hearing.

As many trials can take months and or years to come to court, contact us to be properly represented at the bail hearing to avoid being held in jail for an extended period of time.

Why a Lawyer for a Bail hearing?

As bail hearing lawyers, many times we can speak to the police to avoid going through the bail. Or if the arrested person is held in custody and a bail hearing is going to be held, as a lawyer we can;

At the bail hearing a lawyer can;

A bail hearing a lawyer assist your family by;

For the accused a lawyer helps by;

Many times the crown attorney will want to know about issues such as treatment for alcohol and drugs use, or counselling that we can provide the answers to.
Call now to speak with a bail hearing law firm with years of experience in the Toronto and area courts at 416-878-2275.

★★★★★  Nicholas was extremely patient in explaining a complicated process to our worried family. Ending in the result of bringing my grandson home. We can’t thank him enough. M.Braithwaite, Toronto  (GoogleReviews)

Why Not Duty Counsel?

While the accused does not have to retain a lawyer, and “duty counsel” (the free lawyer appointed by the government) is available, there maybe reasons why hiring your own lawyer for a bail hearing maybe more in your interests.

Having your lawyer representing the accused will ensure that the court hearing and process is conducted in the best interests of the accused.

At this hearing we will;

The Bail Hearing is Part of Your Defence

It is much harder to prepare for a trial where the accused is being held in custody.

Many times accused persons are pressured to plea guilty to secure a quick release from being held in jail, incarnated and due to family or work issues.

Being held in custody frustrates the communication with your family and legal counsel.

When the accused is out of jail they can;

As an bail hearing lawyers we ensure that you receive the best possible legal defence to successfully represent you in court. Contact us to discuss your case free of charge

Bail Conditions May Include;

At the bail hearing the court may insist that the accused if released from custody have conditions, (bail conditions) placed upon them, such as;

The court may want someone to assume the role of a surety. The term surety is the term used in court to describe someone who bailed out an accused person out of jail at a bail hearing. The court may also ask that the surety provide a bail bond.

To qualify to be a surety for a bail hearing you must meet the following criteria;

The court will want the accused to live with the person who is the surety from the date released from jail to their court date. The surety should come to the bail hearing prepared with proof of identification and documents showing they sufficient assets to sign the bail bond. Assets which qualify for the bail bond are:

The Day of the Bail Hearing

At a bail hearing, the hearing will be held in a court room at the court house in front of a Justice of the Peace. A Crown Attorney will represent the police at the hearing and explain to the Justice or Justice why the accused should be kept in custody prior the trial being held.

The Crown Attorney may suggest that the accused could be released from custody but would ask the court to impose bail conditions upon them while on release. As many of the courts have a backlog of trials, not being released at the bail hearing could mean that the accused remains in jail for many months.

As a law firm that has appeared on hundreds of hearings we know the procedures for bail hearings to ensure that your family member has the best opportunity to be released from custody with or without bail conditions.

If the court decides that the accused may be released, the court may request that the accused have “Conditions” applied on them that they must follow. Having a lawyer at the hearing will ensure that strict or un-realistic conditions are not placed upon the accused.

As a criminal defence lawyer I’ve helped thousands of people, successfully defending them in court and in bail hearings.

I know being arrested can be devastating, but there is a solution and we can help. As an experienced trial advocate, my association of criminal lawyers, former crown attorneys, and retired police officers ensures that No Stone is Left Unturned™ in defending and representing our clients.

We stake our reputation on doing everything possible to win your case. Our approach ensures a high quality defence and we have the reviews and winning cases to back it up.

This site is for information only and is not meant to replace qualified legal advice by a criminal defence lawyer. The application and interpretation of law and bail hearings is constantly changing, the writers shall not be held responsible for any information that may be incorrect or out of date. The owners of this website recommend that anyone wishing to fight a criminal charge obtain qualified legal advice before doing so.