The police are under a legal obligation to ensure the driver understood all legal implications and penalties of failing to provide a sample of breath of their breath.

The police must ensure the driver understood the implications of refusing before charging them.

Where the driver does refuse to take the breath test the police can charge the driver with the criminal offence of “Refusing a Breathalyzer Test”.

The penalty for refusing the breath test is the same penalty as if the driver took the test and failed.

It is usually it’s is in the best interest for the driver to comply with the demand and provide a sample of breath because:

Where a driver refuses to take the breath test, the defence will deal with the issues of:

The penalty for refusing a breathalyzer test in Ontario is the same as if the driver took the test and failed.

The charge of refuse breathalyzer test has the following penalties;

Where a police officer has reasonable grounds to believe that a person operating a motor vehicle has within the previous three (3) hours,

Everyone commits the offence of refusing a breathalyzer test who, without reasonable excuse, fails or refuses a demand made under section 254.1 of the Criminal Code of Canada.

When can the Police Demand a Breathalyzer Test?

The police must have the lawful authority or grounds to demand a breathalyzer test.

A police officer can only demand a breathalyzer test when the officer:

When requested to supply a sample of breath for a breathalyzer, the driver must comply with the officers demand.

It is a criminal offence to refuse a breath test lawfully demanded by a police officer.

★★★★★  Excellent lawyer!!! Nicholas was a pleasure to deal with. He knows the DUI laws inside and out. Not only did he get my impaired driving and refuse breath test dropped but he cleared my name from the police database. I wouldn’t hesitate referring him to my friends and family if any of them were to be charged with DUI or related matters. Jacob C.  Toronto (Google Reviews)

The police do make mistakes and they don’t win every case, just because you have charged doesn’t mean you’re guilty.

Charges for refusing a breathalyzer test can be won. Many times there are defences, compromises and solutions other than being found guilty and losing your licence.

Although the charge may seem straight forward in that the driver either “did or did not provide a breath sample”, there are legal issues that must be proven to convict a driver of this charge, for example:

The police have a legal responsibility to ensure that when they demand a breathalyzer test:

Many times this is not done properly.  If the accused did not fully understand, or the police did not explain properly or give the driver a reasonable opportunity to provide the breath sample, then this can become a defence to the charge.

It’s your right to have a judge hear your case and make and impartial decision based upon the facts.

It’s for the judge to decide if everything was done properly and legally, not the police or the crown attorney. You’re not guilty unless a judge says you are. 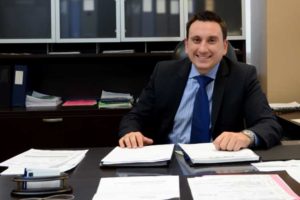 You’re not guilty unless a judge says you are, not the police nor the crown attorney.

As a criminal lawyer I have years of experience with criminal defence, including refusing to take a breathalyzer test and motor vehicle law. Together with my network of legal professionals I provide legal representation for those looking to do everything possible to win and be properly represented in criminal court.

As an impaired driving lawyer my office and associates have helped thousands of people fighting impaired driving and DUI charges (over 4,000 criminal cases and counting). We know being arrested for a DUI (driving while impaired) is devastating, affecting not only you, but your employment, your ability to drive and your family. There is a solution and we can help you.

Call today at 416-731-7113 to discuss your refuse breathalyzer defence today.

★★★★★ Hiring Charitsis law was one of the best decisions I have ever made for my refuse breath test charge. Attorney David Goodman who assisted me was extremely confident in court and well prepared. He explained all the details of what to expect during my hearing which eased all my anxiety. They are very knowledgeable and reliable. I would highly recommend anyone in need of a criminal defence lawyer to hire Charitsis Law, worth every penny!

★★★★★ In January 2020 I was charged with both Impaired Driving and Refusing a Roadside Breathalyzer. I’ve never been in trouble with the police before and didn’t know who to turn to. My livelihood depends on my ability to drive and no criminal record. After doing extensive research and dozens of reference checks I decided to reach out to Nicholas. I was surprised that he personally answered my phone call on a Saturday morning! From my first phone call I could tell that he was professional, honest and extremely knowledgeable. Nicholas clearly explained to me what my chances were and well thought out options on how to proceed. As a result of the covid19 situation the courts were closed, but this didn’t stop Nicholas from working his magic. He obtained my disclosure from the Newmarket crown attorney office and found problems with the police case. Nicholas conducted pretrial with the crown attorney even while the courts were not in session. My charges ended up getting dropped to a traffic ticket with no criminal record and no suspension of my drivers licence. I couldn’t have imagined a better result. Nicholas kept me informed every step of the way and guided me right from the start. Other lawyers had advised me to plead guilty, only Nicholas had a plan to fight and win. Thank you so much for all of your hard work and saving me from being ruined.

★★★★★ My husband was charged with impaired driving and over 80. We felt totally hopeless. We saw a bunch of criminal lawyers for initial consultation, but only after meeting with Nicholas Charitsis and Vadim Paskaru we could see that they would do whatever it takes to win our case. It was a difficult case, but Nicholas and Vadim were with us every step of the way, supporting us, explaining next steps, always answering our questions. As a result of their work, the impaired driving and over 80 charges were withdrawn. My husband ended up with careless driving traffic ticket, no criminal record. We are very grateful to this amazing team of knowledgeable and skilled criminal lawyers. We would recommend them to anyone who is in trouble and does not know what to do.

★★★★★ By far the best criminal lawyers around. Nicholas and his team were able to drop my Refuse To Provide Breath Sample charge down to a traffic ticket. No criminal record and no suspension of my drivers licence. Above all Nicholas is very personable and makes sure that you are informed about every step of your case. At times I felt frustrated that my case was dragging but in the end it was worth the wait. Nicholas delivered on his promise to have my charges dropped.

★★★★★ I was charged with Failure to Provide a Breathalyzer and I was scared. My job was on the line because getting a criminal record and losing my driver’s license would stop me from being a real estate agent. This case was my entire life. I was depressed for weeks after being charged since the York Regional Police published my name in the newspaper and all over the internet because of my criminal charge. I have not taken anything so seriously my entire life. My family and friends helped me search for a lawyer and all searches were leading to Nicholas being the best expert in this field. I called his office and was able to book a meeting the same day. My parents came with me to his office for moral support. Nicholas then took us into his office and cracked a joke making us all feel comfortable. He sat us down and explained my options in plain English. Immediately after talking to him he made me feel at ease. Nicholas was extremely professional and down to earth. He asked me about my academic and work experience which he then used to formulate a proposal to the crown attorney to drop my charges down to a traffic ticket! The result was that my criminal charge was withdrawn and my driver’s licence was not suspended. The truth is that I paid close to $10,000 for this service and I have absolutely no regrets hiring him. Nicholas not only saved my career but he saved my life. I came out of my depression and was ready to tackle my career in real estate. I should also mention that Michelle was great too. She would regularly call me and update me about everything happening with my case. This made me feel at ease through the process. Thank you Nicholas and team for everything you have done for me. Nicholas was a GodSend!

★★★★★ When I first came to Charitsis Law with my criminal charge of refusal to provide a breathalyzer sample, I was in a pretty bad place. Minimizing the trouble that was headed my way from this charge had become my only priority in life. I went with Charitsis Law because I could tell that they were going find my best-case scenario. At the time, we all understood that my best-case result was most likely going to be a dangerous driving charge, which was still not pretty.
Imagine my relief when my lawyer called me soon after with a big grin that I could hear across the phone, saying that he was going to get me acquitted. When the crown’s deal came across the table my lawyer’s comprehensive explanation of the situation allowed me to confidently refuse their offer, and proceed to trial. At trial, my lawyer made our case quick and to-the-point. There were no frills and no dwelling on talking points. He knew well both the precedents and the pertaining laws, and let them do the talking. Waiting for the judge to voice his decision was probably the most stressful moment of my life, but when he said, “Andrew, you’re free to go”, I knew I made the right decision.I am not sure that every lawyer would have discovered the detail that got me acquitted, but Charitsis Law found it.